like others i have too much work right now to blog more detailed articles, so here is a summary of some bloggable content of the past days.

the viral tv shopping channel parody where to buy an ak-47 gun by amnesty international. 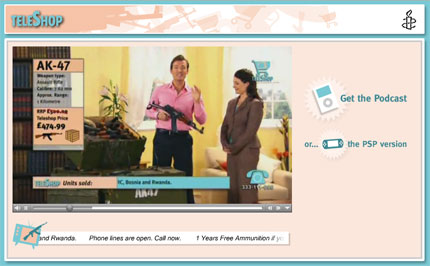 a new viral ad archive called ‘viral hq’ at www.viralhq.com by james fraser – take a look at the favourites.

the ‘digital sparks 06‘ collegiate media contest – tactual audible visible. call for entries up to february 15th. the winner will be presented at the zkm | center for art and media in march 2006 in karlsruhe, germany.

“mozilla seeks to expand awareness of firefox among a broader audience for web browsers: mainstream consumers who may have little knowledge of the value proposition for firefox. to help increase awareness of firefox among this target audience, mozilla would like to produce a high-quality, innovative 30-second ad that introduces firefox to mainstream web users. in line with its history and orientation, mozilla is opening up the creation of its initial advertising creative to film/tv/advertising/multimedia professionals, students and aspiring pros as part of the firefox flicks ad contest.”