don sent me the link to this article at electronista stating the apple iphone launch in germany for november 12th 2007 and revealing some more details.

“apple may launch its iphone campaign in europe with a 3g-capable iphone with enhanced storage, according to what appears to be a leaked ad from t-mobile germany. the ad promises a version of the handset with support for 3g-level cellular internet […] it also suggests that the device will carry 16gb of memory, representing the first storage upgrade to the device since its us launch in june 2007. visual voicemail and the 2-megapixel camera would remain the same as for the us version […] t-mobile itself hasn’t officially confirmed its selection as germany’s exclusive carrier but has already been caught preparing support materials for the iphone, in one case hosting images for the product on its own website.” 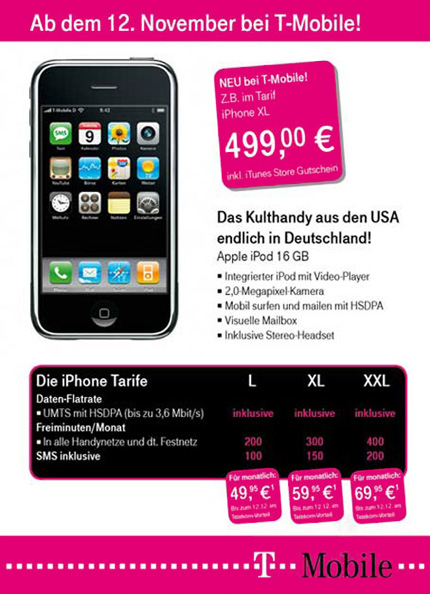 “t-mobile’s reported ad would also be the first to commit to a definitive release date for the iphone outside of the us, slating the handset for a release with the carrier on november 12th 2007. apple has already promised a fourth-quarter release for the iphone in europe but has yet to formally announce a timetable for the launch. the california firm is expected to accompany the german introduction with an o2 version in the uk and an orange version for france.

i still think this might be a hoax, but you never know …